From China to Japan to Thailand, the Far East has been the birthplace for some striking Asian cat breeds with sociable personalities. 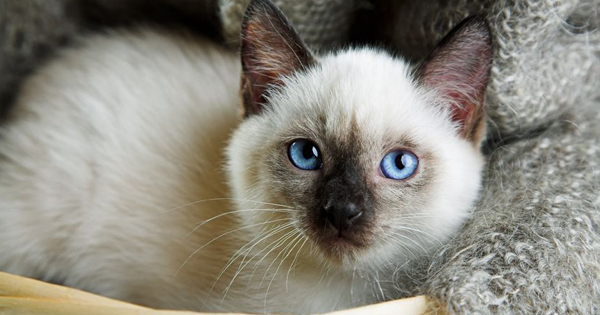 Siamese cats originated in Thailand, which was formerly called Siam. These graceful, lithe Asian cats are known for their blue or violet eyes and their pointed coats of seal, lilac, blue and chocolate. Siamese cats are available in three different body shapes. Siamese are family-oriented and crave constant companionship. They are chatty cats, and they are not shy about speaking out in distinct vocal sounds. Siamese are interactive, playful and highly intelligent.

As its name implies, the Singapura originally hails from Singapore. Singapuras are compact cats with a muscular small to medium-sized physique. Their short coats are typically ivory in color with dark brown markings. They are sociable and interactive cats that remain curious and playful long after their kitten years.

The Japanese bobtail is known worldwide as a good luck figure in its native Japan, where ceramic statues known as maneki-neko can be sited in entryways to private homes and businesses. As the name implies, the Japanese bobtail’s distinguishing physical characteristic is its short tail. The coat may be short or long, and coat colors include red, white, black, red and white, black and white and white, red and tortoiseshell. Japanese bobtails are outgoing, playful, loyal, sociable, intelligent and vocal.

Oriental shorthair cats were created by crossing Siamese cats with other domestic feline breeds. The goal was to retain the sleek and slender form of the Siamese while introducing a much wider selection of coats colors and patterns. Oriental shorthairs are available in an astounding number of color and pattern choices. In addition to their sleek physique, which is deceptively muscular and athletic, these Asian cats are also known for their large ears.

In the Korat’s native homeland of Thailand, it is held in high regard as a bringer of good fortune. The Korat is identified by its short blue coat and large green eyes. The tip of each blue hair on the Korat’s coat is silver, giving the cat an overall shimmer. Korats tend to shed less than other cats. Korats are gentle and affectionate cats that thrive on human companionship.

Although the Tonkinese was originally developed within the United States during the 1950s, this cat is a domestic hybrid that was created by crossing Siamese and Burmese cats. The resulting cat was named after the Tonkin gulf, which is situated near both countries of the Tonkinese’s Asian ancestral roots. The Tonkinese coat is available in solid and pointed hues, including blue, seal, chocolate and lilac. The Tonkinese is a sociable, loving and affectionate companion.

Like the Tonkinese, the Burmese was made in the U.S.A., but has ancestry that originates in Asia. The first Burmese was born when a brown female domestic cat from Burma bred with a Siamese cat in San Francisco. The mother cat subsequently bred with one of the resulting kittens and gave birth to more of the brown kittens. Today’s Burmese cats sport coats in a variety of color and pattern choices, and their eyes are universally golden yellow in hue.