Some cats offer a unique appearance in their coat as a result of the rex gene. Cats that possess this gene are the curly haired cats. The rex gene produces curly whiskers and waves in the coat. Cats with curly hair offer the prospective cat owner a change of appearance from the typical short-haired and longhaired breeds. Here are five curly-coated cuties to consider. 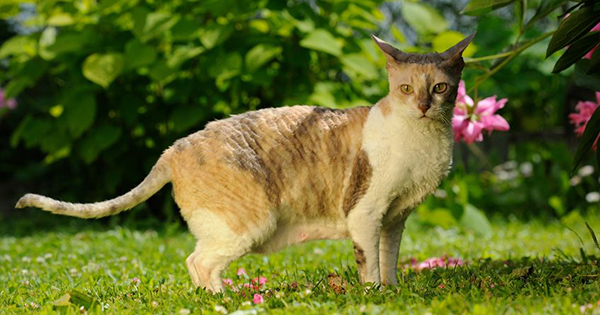 The Devon rex originated in Devon, England during the 1960s. The Devon rex is small to medium in size, with a compact body, large ears and a coat of curls and ripples. The coat may be of any color or pattern. This curly haired cat craves companfionship and thrives on interaction with all family members, including children and other pets. They are lively and playful, and they love to be the center of attention.

The LaPerm was created in the United States during the 1980s. LaPerms are the smallest of the curly haired cats. The curly haired gene in the LaPerm is a dominant gene, unlike that of the Cornish rex and the Devon Rex, which is recessive. The LaPerm’s coat may be long or short, and only kittens that are born with a curly coat or, at the very least, curly whiskers will grow up to exhibit the characteristic curls. The coat may exhibit any color or pattern. LaPerms are highly affectionate and adore the companionship of their human family members. They are intelligent, inquisitive and playful.

As the name implies, the German rex originated in Germany during the 1940s. The medium-sized cat is larger than the Cornish rex. The wavy coat comes in any color with the exceptions of lilac, chocolate and color points. The German rex is intelligent, lively and playful. It is also loyal, affectionate and patient, and it gets along with children and other pets.

The Selkirk rex originated in the state of Montana in 1987. The Selkirk rex is a medium to large muscular cat with a round head and a coat that may be longhaired or shorthaired. The consistent trait of the Selkirk rex is the soft curls that make up its coat. The curly coat comes in any color or pattern. The Selkirk rex is highly sociable, curious and playful. This cat will not thrive without companionship, and it will insist on actively participating in all household activities.

When it comes to grooming cats with curly hair, the requirements are minimal. Those with shorter coats, such as the Cornish rex and the Devon rex, require no brushing. Monthly bathing will help to remove oils and debris that can become trapped against the skin underneath the tight curls. If you are looking for a cat that sheds minimally, either the Cornish rex or the Devon rex will be the ideal choice. Curly haired cats with longer locks, such as the Selkirk rex and the LaPerm, will require a weekly brushing to prevent mats and tangles.

Whichever breed you choose among the curly-coated kitties, you are sure to be rewarded with a loving and engaging companion that will bond closely with you and strive to become the center of your world.