All throughout history, one of the main reasons people kept dogs was to guard their livestock, families and/or property. While most any breed of dog will protect its owners if necessary, some breeds are naturally better suited for the job. The best guard dogs tend to be muscular and courageous such as those described below. 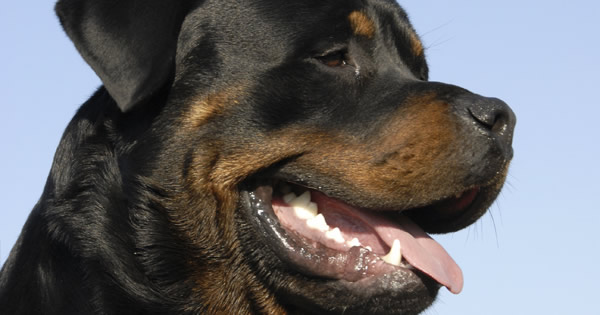 Some of the best protection dogs today are Bullmastiffs. With their massive size and intimidating appearance, any intruder will think twice before breaking into your home. The Bullmastiff was developed in the United Kingdom as a fearless guard dog for large estates. Bullmastiffs are short-haired dogs that can be fawn, brindle or red and can weigh as much as 120 pounds full grown.

Another great guard dog is the Rottweiler. While these dogs can be quite gentle with their human family, they are very distrusting of strangers and will become aggressive if necessary. Rottweilers originated in Germany where they served many purposes including herding, pulling carts, and guarding homes and businesses. These are muscular dogs that have short black and tan hair and can weigh up to 130 pounds when mature.

Giant Schnauzers have their origins in Germany where they were developed to drive livestock and guard farms. This is the largest Schnauzer breed, with full grown adults weighing between 75 and 95 pounds at maturity. Giant Schnauzers are fearless dogs that have short, wiry coats that can be either solid black or salt and pepper. They are strong, active dogs that are not recommended for small children.

Doberman Pinschers have served many purposes over the years; however, they have most commonly been used as excellent protection dogs. They originated in Germany where they were developed for protection purposes. This is a highly intelligent breed that learns quickly. Dobermans have a sleek, muscular body and short hair that can be black and tan, blue, blue and tan, or red. Fully grown Dobermans weigh between 60 and 100 pounds.

Another extremely intelligent dog that makes a terrific guard dog is the German Shepherd (GSD). This is another breed that originated in Germany where it was developed to herd sheep. However, due to their fearless temperaments, they were also often used as military and police dogs. The best thing about German Shepherds is that they are great with kids. These are strong dogs with short hair that can be black and tan, black or white.

These are just some of the many breeds available today that make great guard dogs for families and businesses. Other breeds that make fantastic protection dogs include American Staffordshire Terriers, Akitas, Rhodesian Ridgebacks, Boerboels, Saint Bernards and Argentinian Mastiffs.

It can be hard to know how to choose the right dog breed for you and your family. Find a breed that matches your lifestyle here: Best Tips for Picking a Dog Breed.