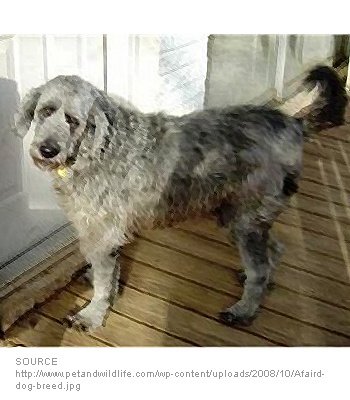 The ancestors of the Afaird belong to ancient breeds in their respective regions. The Afghan Hound is one of the oldest dog breeds in the world. Living in the mountains of Afghanistan, it is known for its distinctively thick, long, and silky coat. Although the Briard had been in France for centuries, it did not become popular until after the Paris Dog Show of 1863. It was initially bred to herd and guard flocks of sheep. The circumstances behind the crossing of the Afghan Hound and the Briard is largely unknown.

The Afaird dog draws its behavioral traits from its ancestors. They tend to be calm indoors but active and playful outdoors, and they will chase anything that moves quickly. Energetic and intelligent, the Afaird should be afforded a lot of space if they are physically closer to the Afghan Hound. They are particularly good with families with older children.

Afairds require a substantial amount of care. Their coats require a one-hour grooming session twice a week. Also, their ears should be kept clean, and they should get a bath about every two months.

There are no known common health issues for the Afaird. However, it might be helpful to study the ailments common with the Afghan Hound and the Briard. While the Afghan Hound is generally health, the Briard is prone to cataracts, hip dysplasia, bloat, and stomach torsion.

Afaird is a dog that is a cross between the Afghan Hound and the Briard. The ancestors of the Afaird belong to ancient breeds in their respective regions, which are Afghanistan and France, respectively. Technically, there are no nicknames for Afairds. However, there are sometimes referred to as Afghan Hound Hybrid Dogs or Briard Hybrid Dogs, depending on the trait dominance of one dog breed over the other. The name Afaird is a portmanteau of the first syllable of the word “Afghan” and the misspelled last syllable of the word “Briard”. The Afaird is not officially recognized by any major dog breed organizations.