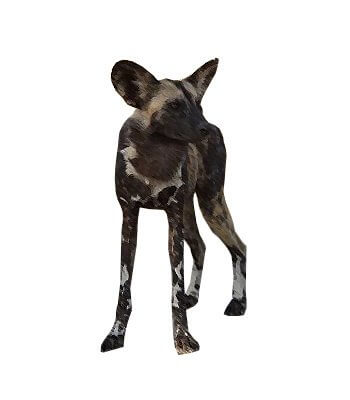 Wild and undomesticated, the African Wild Dog is named after its origins in Sub-Saharan Africa. It is notable for being the only member of the genus Lycaon, which distinguishes it from other canines. Based on the writings of 2nd-century Greco-Roman poet Oppian, the African Wild Dog is possibly the progeny of the wolf and the panther. Danish zoologist Coenraad Temmick was the first person to scientifically describe and classify the animal in 1820 when examining specimens from the coast of what is now known as Mozambique. However, Temmick erroneously classified the dog as a hyena. Seven years later, British anatomist and naturalist Joshua Brookes recognized it as a canine, thus placing it among the family of dog-like mammals. In earlier times, the African Wild Dog could be found in mountainous, savanna, woodland, grassland, and semi-desert areas throughout Africa. However, these days they are barely in western and central Africa; they mostly live in eastern and southern Africa. Populations have been decimated by habitat loss, spread of diseases, and human persecution via hunting and poisoning.

No other canine in Africa is built as sturdily and bulky as the African Wild Dog. The typical dog weighs around 44 to 60 pounds, with a body length of 30 to 40 inches and a 12- to 16-inch tail. The coat is usually in shades of brown, black, and beige. As the only Lycaon in existence, it has fewer toes and teeth than other canines; this is ideal for a carnivore with a diet that is virtually all meat.

The African Wild Dog is known as one of the most social members of the Canidae, a biological family that includes dog-like mammals like wolves, foxes, and jackals. This is most commonly manifested in the social bonds created between the animals; solitary living and hunting is virtually alien to this species. African wild dogs live together and hunt together in groups called packs. These groups are usually led by an alpha male-and-female pairing, with their offspring and related members following them.

There is no data available about grooming an African Wild Dog.

The African Wild Dog is classified as an endangered species by the International Union for Conservation of Nature (IUCN).

The official scientific name of this dog breed is Lycaon pictus. The African Wild Dog is sometimes referred to as the Cape Hunting Dog, due to its large numbers near the Cape Peninsula in the Republic of South Africa. The dog is also prominent in east Africa and other parts of southern Africa. Another nickname, Tri-Colored Dog, is probably a reference to the color scheme of the dog’s coat. Other nicknames include painted wolf, painted dog, and painted lycaon.