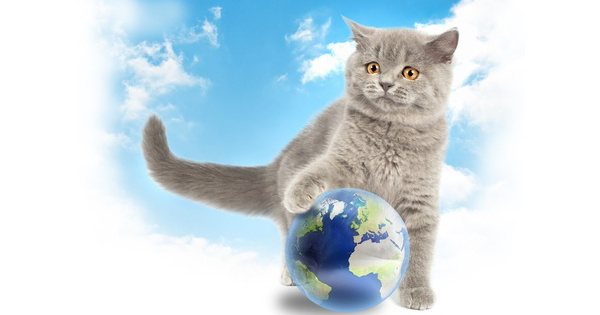 According to Guinness World Records, the smallest cat in the world was a female blue-point Himalayan by the name of Tinker Toy. Tinker Toy lived with her owners in Taylorville, Illinois and was only two and 3/4 inches tall and weighed just one and a half pounds full grown. Unfortunately, it is reported that she died at six years old in November, 1997.

The oldest cat of all time on record was a female named Creme Puff who lived with her owner in Austin, Texas. Creme Puff was born in 1967 and lived three days past her 38th birthday in August of 2005. The oldest living cat on record is a female named Pinky who lives with her owners in Hoyt, Kansas. Pinky was born in 1989 making her 24 years old today.

Guinness Book of World Records Heaviest Cat The heaviest domesticated cat on record with Guinness was a male tabby by the name of Himmy who weighed in at nearly 47 pounds. Himmy lived with his owners in Cairns, Queensland until he died of respiratory failure at ten years old. However, there is a five year old female cat in Russia by the name of Katy who is very much alive and weighs in at 44 pounds. Know how to prevent pet obesity.

Guinness Book of World Records Longest Cat The worlds longest cat according to Guinness World Records was a male Maine Coon by the name of Stewie. Stewie measured an amazing 48.5 inches long from the tip of his muzzle to the tip of his tail. Stewie, whose full name was Mymains Stewart Gilligan lost his battle with cancer in February, 2013.

First “Bionic” Cat Oscar, a male black cat who lived with his owners in New Jersey, had both of his rear legs cut off in a combine harvester. However, his owners had prosthetic legs drilled into the remaining parts of his back legs. Although he is an indoor cat now, Oscar gets around just fine and turned six years old in 2013. Find here tips on keeping your disabled pet healthy and happy.

Loudest Purr on Record Cats are known to be quiet pets that barely make a noise aside from purring when they are content. However, there is one cat by the name of Smokey whose purr is as loud as a hairdryer or lawnmower! According to Guinness, the average cat’s purr is about 25 decibels, but Smokey has been known to purr as loud as 92.7 dBs.

There are many amazing cats in the world, and these are just a few. Read these amazing true cat stories. Of course, all of our pets are special in their own ways as they make our lives so much more enriching and enjoyable. For people who love animals, cats are not simply pets, they are cherished members of the family. Our canine friends also have quite some interesting records on their name Guinness World Records Dogs.