If you have a cat that is not solid-colored and you are like many other people today, you may automatically label it a tabby cat. However, you are only partially correct. While some people think that the word tabby defines a breed of cat, it is actually a term that defines a color pattern in felines. 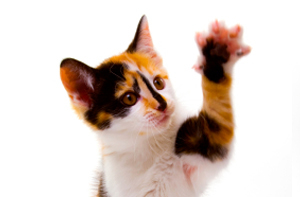 The Most Common Color Patterns in Cats

As stated above, tabby refers to a color pattern in cats, and it is the most common feline coat pattern. In fact, no matter what color your cat may be, it most likely possesses the tabby gene. Even calico cats and solid-colored cats can produce kittens with tabby color patterns. While there are many different color patterns you may find in cats, described below are the most common:

The classic tabby cat is the most common color pattern you will see in cats. These cats have a distinct M-shaped line on their foreheads and thin pencil-like lines on their faces. They are also distinguished by bold, circular patterns along their ribs, much like bullseyes. Many people refer to this pattern as a blotched tabby.

The spotted tabby cat has spots that appear all over its body. These spots are typically smaller on the sides and larger on the rear legs. They can be round but are often oval as well. Sometimes, there will be a few mackerel-like stripes on these cats. However, spotted tabbies are distinguished from mackerels because they have more spots than stripes.

A ticked tabby cat is often referred to as an Agouti or Abyssinian Tabby cat. While these cats have typical tabby markings on the face, they do not bear any stripes or spots on their bodies. Instead, the individual hairs of ticked tabbies are striped with light and dark bands giving them a unique ticked look.

A cat with a mackerel tabby cat pattern has thin stripes that run parallel down each side. Many people refer to these cats as tiger cats. Each stripe on a mackerel tabby runs down the sides vertically and are typically evenly spaced and not broken. These stripes branch out from a larger stripe that runs along the back resembling a fish skeleton.

A patched tabby cat, also known as a tortoiseshell or tortie, is a cat that has separate patches of red tabby and brown tabby on the same animal. Patched tabbies can display any one or two of the other tabby patterns in two different colors. Markings are typically more apparent on their head and legs.

The classic tabby, spotted tabby, ticked tabby, mackerel tabby and patched tabby, these are the five most common color patterns in cats. They can be distinguished by their unique spots or stripes. All of these patterns stem from the tabby gene, and even solid-colored cats and calico cats carry these genes.

Home → Pet Care → Articles → What Is a Tabby Cat