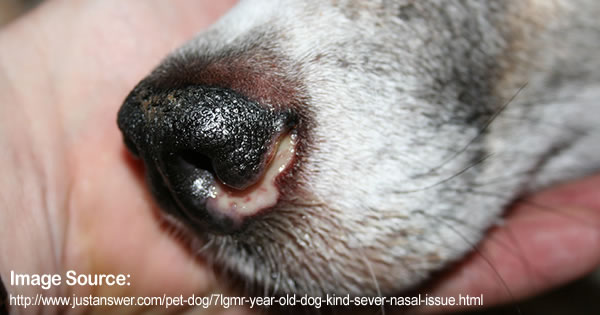 Aspergillosis is a pet health condition caused by infection with Aspergillus, a common fungus found in dust, grass and hay. Outdoor pets and those living on farms are more susceptible to the condition than other dogs and cats because they have more contact with the fungus. The infection occurs in both dogs and cats, but canine Aspergillosis is more common than the feline form of the disease.

How Aspergillosis Affects Your Pet

Aspergillosis has nasal and disseminated forms. Nasal aspergillosis is the most common form of this pet disease. In this condition, Aspergillus causes inflammation and tissue damage in the nasal passages and sinuses. If left untreated, this infection can result in significant destruction of the nasal turbinate bones. In some severe cases, the fungus also invades the eye orbit and the bones of the skull. Disseminated aspergillosis is rare. It usually occurs only in pets with immune systems weakened by other conditions. This condition occurs when the fungus enters through the nose and spreads to the lungs. From the lungs, Aspergillus enters the blood and spreads to other parts of the body. The most commonly infected areas are the spine, kidneys and eyes, but the infection can spread anywhere in the body. Symptoms of this pet health problem develop slowly over a period of several months.

Signs of nasal aspergillosis include the following: Sneezing, Swollen nose, Bleeding from the nose, Decreased appetite, Discharge from one or both nostrils, Pawing at the nose, Discoloration of the nose, Symptoms of disseminated aspergillosis vary but often include one or more of the following: Lameness, Back pain, Swelling in the limbs, Inflammation of the eyes, Fever, Weight loss, Loss of appetite, Weakness, Muscle loss, Vomiting, Diarrhea, Lethargy and Enlarged lymph nodes.

Veterinarians treat nasal aspergillosis with antifungal drugs. These drugs can be infused into the nasal passages while the animal is under anesthesia or given orally. In most cases, successful treatment requires infusion of the drugs. Some animals with disseminated disease recover without treatment due to immune system action. In other cases, antifungal drugs are needed to control symptoms. While it is possible to clear the fungus through the use of medication, very few animals are cured completely. In most cases, treatment only helps alleviate symptoms, and the pet must be carefully monitored for recurrence of the infection. Severely ill animals can die from the disease.