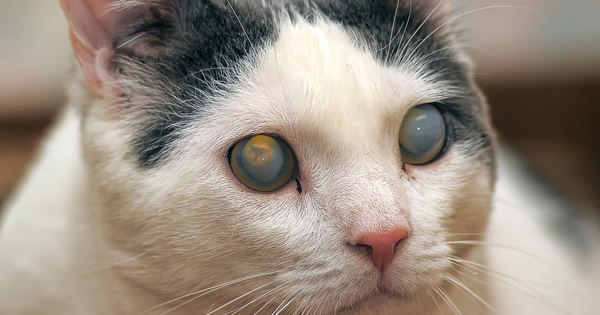 A clouding of the eye’s transparent lens is called a cataract. Common in people, this eye problem is also common in pets. Typical causes for cataracts in dogs include genetic abnormalities, diabetes mellitus, old age, chronic eye infection or inflammation, trauma, nutritional deficiencies and radiation exposure. The cause of cataracts in cats is usually chronic anterior uveitis, a type of eye inflammation.

How Cataracts Affects Your Pet

Like a smudge on a pair of glasses, a cloudy area on the eye's lens impedes vision. When the problem first starts to develop, it may be small and not impact the pet’s vision very much. As the clouding progresses, however, it becomes thicker and denser, eventually causing blindness. Further complications occur when the cloudy areas detach from the lens and damage the delicate structures of the eye. Detached pieces can also impede appropriate drainage within the eye. This causes a rise in pressure and leads to glaucoma and permanent blindness. It is also possible for established cataracts to dissolve, a dangerous process that causes painful inflammation and can lead to glaucoma and blindness.

The most obvious sign of cataracts in dogs and cats is bluish or cloudy discoloration of the eyes. It is important to note, however, that nuclear sclerosis, a common and fairly benign age-related change, can look very similar. Only a veterinarian can distinguish the two conditions. In addition to discoloration of the eyes, cataracts in cats and dogs cause vision impairment. Signs of impaired vision often include the following: Bumping into things, Startling easily when approached, Increased anxiety or fearfulness and Failure to react to visual stimuli.

Ways to help prevent cataracts in dogs and cats include feeding pets a high-quality diet, managing diabetes when present and providing regular veterinary care and prompt treatment for trauma or other eye problems. When caused by a genetic abnormality, however, the condition can only be prevented by not breeding affected animals. Once established, almost all cataracts progress. There is no proven way to stop their progression, and surgical removal is the only cure. During surgery, the cloudy lens is removed and replaced with an artificial one. Surgery is typically very effective, but animals do require fairly extensive after-care from their owners following the procedure.

While the problem can occur in any breed, the dog breeds most prone to developing clouding of the lens include the following: Cocker spaniel, Smooth fox terrier, Havanesse, Bichon fries, Boston terrier, Miniature poodle, Toy poodle, Standard poodle, Silky terrier and Miniature schnauzer. Cataracts in cats are most common in Persians, Himalayans and British shorthairs.