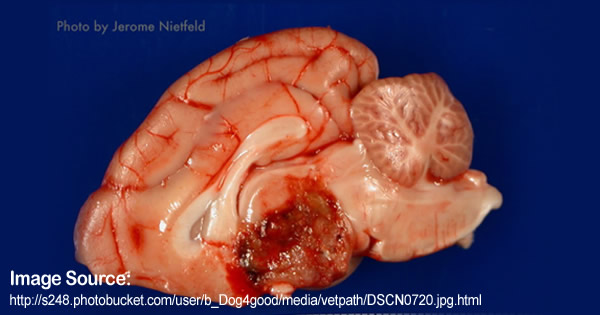 The pituitary gland is a small structure located at the base of the brain. It produces hormones that regulate adrenal function, thyroid function, growth, daily cycles and the sexual organs. Pituitary macroadenomas are large non-cancerous tumors of the pituitary gland. These tumors are more common in dogs than in cats.

How Pituitary Macroadenoma Affects Your Pet

The majority of pituitary macroadenomas are functional. This means that they secrete hormones. Most commonly, functional macroadenomas secrete adrenocorticotrophic hormone (ACTH). This hormone causes the adrenal glands to release cortisol. When released in large amounts, cortisol produces Cushing's syndrome, a common metabolic disease of dogs. While many pituitary-dependant cases of canine Cushing's syndrome are caused by microadenomas, approximately 15 to 50 percent of pituitary-dependant cases are caused by functional macroadenomas. ACTH-secreting macroadenomas rarely occur in cats. The second most common type of pituitary macroadenoma secretes growth hormone. This type of tumor is only functional in cats and causes a number of cat health problems including Diabetes Mellitus, Kidney Disease, Abnormal Growth, Liver Disease, Heart Problems and Degenerative Joint Disease. Even nonfunctional macroadenomas can cause pet health problems. This is because as these tumors grow, they start to press on different areas of the brain. This pressure produces various neurological symptoms. The growth rates of pituitary tumors in dogs and cats vary greatly, and the rate at which symptoms progress depends on tumor type.

Currently, the best potential cure for pituitary macroadenomas is surgical removal. This type of surgery, however, is rarely attempted in pets. Brain surgery is expensive, risky and requires an expert surgeon. A more common approach to treating this pet health problem is radiation therapy to shrink tumors. In many cases, this reduces or eliminates symptoms and can prolong survival. The most common method of dealing with pituitary macroadenomas is medical management. In dogs with ACTH-secreting tumors, this means using medication to treat the Cushing's syndrome caused by increased ACTH. In cats with growth-hormone secreting tumors, treatment involves using large doses of insulin to control diabetes, medications to control heart disease and other drugs as needed to treat symptoms. While medical management provides short-term relief, it is not a cure. Most pets will eventually die from complications caused by oversecretion of hormones.

Members of all canine and feline breeds have the potential to develop pituitary tumors, but some common at-risk dog breeds include the following: Boxer, Pug, Dachshund, Bulldog and Boston terrier.