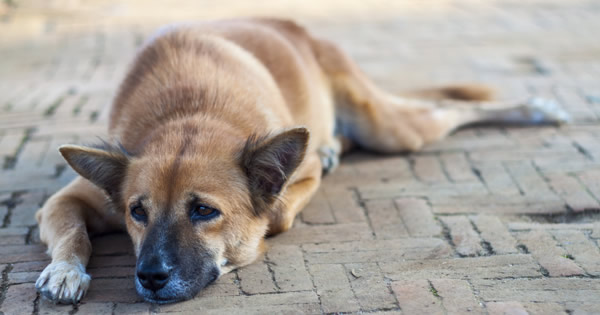 The bacteria that cause RMSF are found in tick saliva. For a tick to infect pets with Rickettsia rickettsii, it typically must be attached to the dog for four to six hours. Once the bacteria enter the pet's body, they spread to the walls of the blood vessels and multiply. These bacteria cause vasculitis, the medical term for inflammation of blood vessel walls. The presence of the bacteria and the resulting vasculitis can cause swelling of blood vessel walls, bleeding, shock, formation of blood clots, organ damage and circulatory collapse. The organs most commonly affected by RMSF are the heart, kidneys and skin, but damage to all organs, including the brain, is possible. Symptoms of Rocky Mountain Spotted Fever in a pet usually begin four to five days after a bite from an infected tick. The disease is most easily treated in its early stages before significant organ damage has occurred. The earlier treatment is initiated, the better the prognosis for the infected dog. If not treated promptly, RMSF is a potentially fatal illness. The disease has an expected fatality rate of approximately 1 to 10 percent in pets.

Common symptoms of this pet health problem include the following: Fever, Extreme lethargy, Red spots on the gums, Focal hemorrhages in the whites of the eyes, Bruising or red spots on the skin, Loss of appetite, Swollen lymph nodes, Swelling of the face or limbs, Joint pain, Coughing, Difficulty breathing, Abdominal pain, Vomiting, Diarrhea, Balance problems, Altered mental state, Nose bleeds, Blood in the urine, Blood in the stool and Seizures.

Because delaying treatment could result in severe disease and put the life of the affected dog in danger, treatment is usually started based on clinical suspicion of Rickettsia rickettsii infection rather than blood test results. Rocky Mountain Spotted Fever is treated with antibiotics known to be effective against rickettsial organisms.  Supportive care, including fluid therapy, may also be necessary to treat RMSF symptoms. Supportive therapies are chosen based on the specific symptoms of each affected pet. The best way to prevent Rocky Mountain Spotted Fever is to use tick preventatives and remove attached ticks promptly from your pet.

RMSF can affect dogs of all breeds, but young purebred dogs are reported to be more susceptible to developing severe disease due to Rickettsia rickettsii infection than mixed breeds. German shepherds are especially vulnerable to this dog health problem.