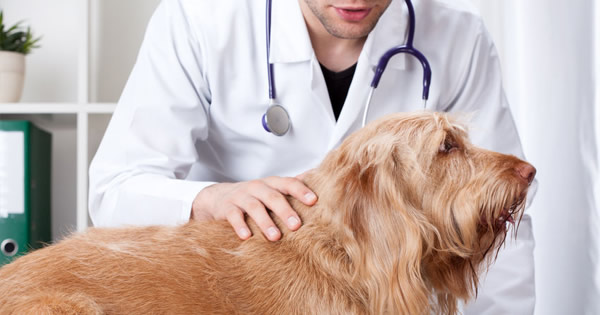 A pet's spine is made up of vertebrae, and between these vertebrae are flexible intervertebral discs. Each disc is composed of a soft nucleus surrounded by a fibrous outer layer. When the outer layer ruptures, the nucleus bulges out to press on the spinal cord. This results in various problems including pain, paralysis and nerve damage. This condition is also called herniated or slipped discs, are more common in dogs than cats, but they occur in both species.

How Ruptured Disc Affects Your Pet

Over time, intervertebral discs harden and become brittle. As they lose their flexibility, they are less able to withstand shock and more likely to rupture after any type of impact. When the outer covering ruptures, the nucleus, which hardens with age, is pushed out between the vertebrae to impinge on the spinal cord. This can happen suddenly due to trauma or gradually due to degeneration. When a disc presses on the spinal cord, it inhibits or prevents nerve transmission. Specific symptoms depend on the location of the ruptured disc. Ruptures in the neck can cause symptoms throughout the pet's body, but ruptured discs located lower on the spinal column only cause symptoms below the area of the rupture. For example, a ruptured disc in the middle of the back could cause problems with the lower limbs, bladder and other structures below the waist, but it would not be expected to cause problems in the forelimbs. On some pet with this condition, discs deteriorate at an accelerated rate. This means that dachshunds and other short-legged dogs often have disc problems when they are four or five years old while members of other breeds do not commonly have age-related disc problems until they are much older.

Symptoms of this cat and dog health problem vary, but some common symptoms include the following: Weakness in the hind legs, Anxiety, Lameness, Back or neck spasms, Muscle tension, Hunched posture, Decreased activity, Unwillingness to jump, Loss of bladder control, Fecal incontinence and Crying in pain.

In mild cases, nonsurgical treatment might be sufficient to manage the symptoms of this dog and cat health problem. This type of treatment involves confining the affected animal to a cage or small area for four to six weeks and using anti-inflammatory drugs to reduce swelling around the spinal cord. Pain medication may also be required to keep the affected pet comfortable. As the swelling is reduced, the animal's symptoms may resolve. If symptoms worsen, the animal will require immediate surgery. Pets with moderate to severe symptoms or progressive symptoms require surgery. Disc surgery reduces pressure on the spinal cord by removing a portion of the ruptured disc or a portion of bone in the area. To be effective, surgery must be performed soon after the injury before extensive nerve damage occurs.

This pet health problem affects members of all canine and feline breeds, but members of the following breeds are at increased risk of developing this disorder: Dachshund, Basset Hound, Shi Tzu, Lhasa Apso, Corgi, Cocker Spaniel, Beagle and Bulldog.