Dogs can be affected by sleep disorders, including insomnia, sleep apnea and narcolepsy with cataplexy. While the attacks of narcolepsy and cataplexy themselves are not life threatening, they can jeopardize your dog’s safety if they occur in potentially dangerous settings. 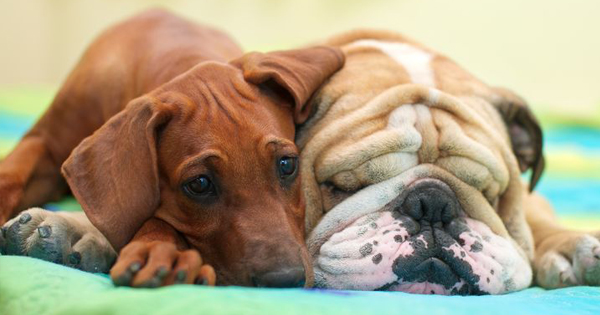 What Is Narcolepsy with Cataplexy?

Narcolepsy and cataplexy are both central nervous system disorders. Narcolepsy in dogs presents as excessive fatigue, lethargy and brief losses of consciousness. Cataplexy in dogs presents as paralysis of the muscles and loss of tendon reflexes. Cataplexy alone does not result in a loss of consciousness. A dog that is experiencing a cataleptic attack remains alert, and its eyes remain responsive. Attacks of narcolepsy in dogs and of cataplexy in dogs are both sudden in onset, they typically last from a few seconds to a few minutes, and they resolve spontaneously. The dog is not suffering or in pain during an attack. What is narcolepsy with cataplexy ? It is the more common occurrence of a dog being affected by simultaneous attacks of both conditions.

The cause of these attacks is not always known, but genetics can be a contributing factor. Some breeds that have an elevated risk for narcolepsy with cataplexy include:

Activities, such as hunting, eating or hard play and exercise with other dogs, can raise the dog’s level of excitement enough to bring about an attack of narcolepsy and cataplexy. The attacks usually start to present in young dogs that are less than six months old.

If you suspect that your dog may have narcolepsy and cataplexy, your veterinarian will perform a physical examination, some basic neurological tests and laboratory screenings, including a complete blood count, chemistry profile panel, thyroid hormone profile and urinalysis, to rule out other medical conditions. Cardiac screenings, such as electrocardiogram and an echocardiogram, may also be performed. Once other medical problems have been ruled out, your veterinarian may perform a test in which he or she attempts to mimic situations in which your dog has experienced attacks to see if an attack can be reproduced. It may also be helpful if you are able to film a video on your smartphone of one of your dog’s attacks so that your veterinarian can witness details of the attack.

Dogs that suffer prolonged and frequent narcolepsy and cataplexy attacks can be treated with medications to reduce the severity of the attacks. These drugs pose the threat for serious side effects, however, and drug therapy is not recommended in most cases. Some dogs outgrow these attacks.

The key to management of this condition is to minimize the excitable conditions that elicit them, particularly those in which a dog’s physical safety could be put in danger during an attack, such as swimming. Activities that take place in pools, open bodies of water, stairwells, roads and other settings where a dog in the throes of an attack may be vulnerable to injury should be closely supervised. If your dog suffers an attack while eating, make sure that food does not become lodged in its airway.

Petting the dog during an attack of narcolepsy and cataplexy can often reverse the attack, as can talking to the dog or making loud noises. As long as the dog’s airway remains clear and the dog is in a safe place, it is not in danger during one of these attacks.

Home → Pet Care → Articles → What Is Narcolepsy With Cataplexy in Dogs