Planning a movie night? Check out eight great movies to watch with your pup!

Golden Retriever – Air Bud Buddy is a golden retriever that takes playing catch to a new level – he is an avid football, soccer, and basketball player! When a young boy named Josh finds him on the streets, they form a strong friendship and Buddy helps Josh make his school’s basketball team. When the team is losing in the championship game, will Buddy escape his captor to save the day?

Lassie After moving from the city to the countryside, Matt Turner starts to finally feel at home when he finds Lassie, a stray mix Collie that his family takes in. Matt’s father loses his job, and Matt convinces his family to start a sheep farm with the help of Lassie. When the Turner’s neighbor tries to sabotage their farm and kidnap Lassie, Matt and Lassie need to save each other.

Fun Fact: The original Lassie was played by a dog named Pal, and the role in later films was filled by his descendants.

Marley and Me – Played by 18 Different Dogs This is a story is based on a journalist’s autobiography called Marley and Me: Life and Love with the World’s Worst Dog. A newly married couple adopts a puppy, and the movie tells the story of the misadventures and lessons their family learns from their thirteen years with their yellow Labrador Retriever, Marley.

Fun Fact: When Marley pees on the coffee table, it wasn’t originally part of the script. That was Clyde (one of the 22 dogs who played Marley) misbehaving!

Dog in a Leading Role

Beethoven the Saint Bernard in Beethoven After escaping a couple of thieves, this Saint Bernard finds a home with the Newton family. The family soon adores Beethoven, who helps the Newton children with crushes and bullies, but George, the Newton’s father, does not immediately take to Beethoven. However, George must help his whole family rally together to save Beethoven from a scheming veterinarian.

Fun Fact: The Newton family names their new dog after Ludwig van Beethoven because he barks along while their youngest daughter plays Beethoven’s Fifth Symphony on the piano.

Winn-Dixie in Because of Winn-Dixie Opal, a young girl who just moved to a new town, finds a Berger Picard in her local grocery store. Opal claims the dog as her own and brings him home, naming him Winn-Dixie after the name of the grocery store. With the arrival of Winn-Dixie, good things start happening to Opal – her relationship with her father strengthens, Winn-Dixie helps Opal make new friends, and Opal starts to learn about her mother.

Dog in a Supporting Role

Petey in The Little Rascals A group of young boys compete in a go-kart race in hopes of winning prize money so they can rebuild their clubhouse after it burned down. Petey, the neighborhood Bulldog, tags along for the adventure.

Fun Fact: Petey is known for a bulls-eye looking ring around his eye.

Toto in The Wizard of Oz When a tornado strikes Dorothy’s home in Kansas, she wakes up with her dog Toto in the Land of Oz. Dorothy and Toto travel down the Yellow Brick Road to find the Emerald City, where she hopes the Wizard of Oz can help get her and mutt Toto home. On their journey, Dorothy and Toto encounter the Good Witch of the North and her munchkins and the Wicked Witch of the West, and befriend a Scarecrow, a Tin Man, and a Cowardly Lion, all who also seek something from the wizard.

Fun Fact: The Cairn Terrier that plays Toto is really named Terry, but she was credited for the film as Toto.

Lady and the Tramp The spaghetti scene in Lady and the Tramp went onto become one of the most classic scenes in film history – even if the romance is between two dogs! Watch the story of Lady, a wealthy family’s sheltered Cocker Spaniel, and Tramp, a street-smart stray mutt, who fall in love in the early 1900s.

Fun Fact: The writers went through at least four names before agreeing with Walt Disney that the male protagonist should be named Tramp. 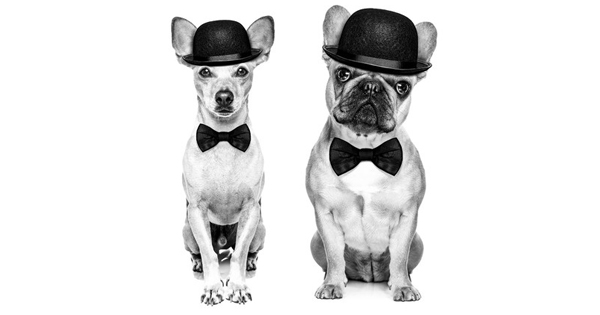 Promises of Laughter, Courtesy of the Comical Canines in Cartoon History !