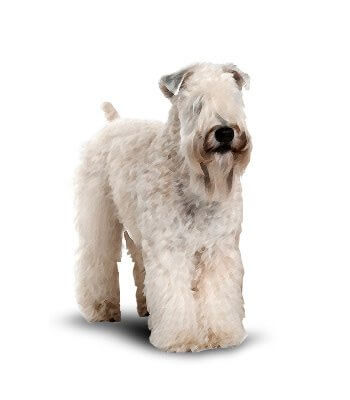 The Soft Coated Wheaten Terrier is a medium-sized dog breed with square proportions. They have quite large heads with short muzzles. The ears are small, fold forward and are set at the side of the dog's head and pendant. SCWT's coat comes in two varieties: The American variety is slightly more heavy and coarse than the thinner, silkier Irish variety. The coats need to be trimmed regularly. They also need regular brushing.

The Soft Coated Wheaten Terrier is joyful, energetic, affectionate, and will never lose their love of playtime. They are more friendly and easy going than other terrier breeds and generally get along well with other dogs.

The soft-coated wheaten terrier is medium in size, standing at an average height of 60 to 18 inches at the shoulders and weighing 30 to 40 pounds. The body is powerful and agile. The coat is long, silky and wavy, and its hue may be any shade of wheaten or red. The muzzle displays the characteristic terrier beard, the hair on top of the head falls forward over the eyes, the button ears flip downward and the tail, which is usually docked, stands erect.

The soft coated wheaten is affectionate and exuberant in its greetings. The breed gets along with children. It can get along with other dogs if it is raised with them, but it has a strong instinct to chase cats and other small mammals. The soft-coated wheaten terrier is confident and independent, displaying a stubborn streak when it sees fit to do so. Soft-coated wheaten terriers tend to be boisterous, they love to jump on people, dig under fences and pull on the leash. Obedience training and socialization from an early age is an important part of raising a dog that will obey commands and exercise acceptable manners. It is also essential to provide these dogs with plenty of mental and physical stimulation to prevent boredom and to keep them out of mischief. Soft-coated wheaten terriers make effective watchdogs.

The silky and wavy coat of a soft-coated wheaten terrier tangles easily. Daily brushing or combing is essential to detangle the hair and prevent matting. Having the coat trimmed every other month will make the brushing task easier. The ears should be checked every week for signs of debris, and they should be kept clean and dry to prevent ear infections. Brush a soft coated wheaten terrier’s teeth daily as part of the grooming routine to prevent the onset of periodontal disease.