The most aggressive dogs are not necessarily the most dangerous dogs, as strength, size, and other factors determine how great of a threat a dog poses. For example, Chihuahuas and Jack Russell Terriers are typically aggressive breeds, though they do not pose a huge threat due to their small size. Find here some of the other most aggressive breeds. 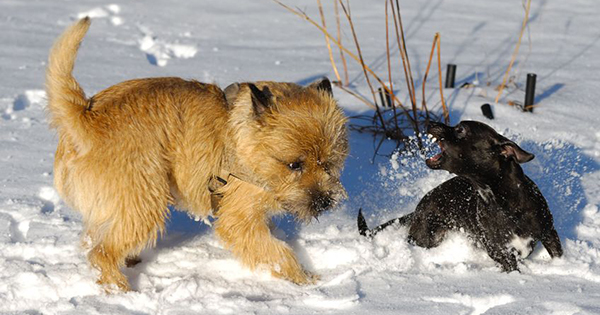 Why are these Dogs More Aggressive?

Learn which dogs are more aggressive than others and whys:

Bull Mastiff: Bull Mastiffs were used in ancient Rome to fight opponents as large as humans, bulls, bears, and lions. Chihuahua: According to researchers at the Applied Animal Behavior Science journal, Chihuahuas, Dachshunds, and Jack Russel Terriers are the most likely breeds to bite a person. However, the breeds are not considered as dangerous as the others on this list due to their small size. Dachshund: Dachshunds were originally bred to hunt badgers. According to the Applied Animal Behavior Science journal, Dachshunds are the most aggressive breed towards strangers and the second most aggressive breed towards owners. Jack Russell Terrier: Jack Russell Terriers are identified as a hunting breed and are especially aggressive towards dogs of the same gender. Pit Bull Terrier: Pit Bull Terriers were responsible for over two-thirds of all dog bites reported in 2014. Rottweiler: Rottweilers accounted for the second largest number of dog bites reported in 2014 and 10% of dog bite fatalities.

While a dog’s breed can give some insight into his/her personality, individual dogs can be aggressive even if their breed is typically docile, and vice versa. Many factors – including nature and nurture – influence how aggressive a particular dog is.

What makes a dog aggressive?

Genetic Makeup Mixed breeds, especially wolf hybrids, are typically more aggressive than purebreds. Mixed breeds are also considered more unpredictable than purebred dogs because of their mixed genes; it is impossible to tell what personality traits a mixed breed puppy will inherit from its parent breeds. Additionally, many mixed breeds were developed for uses such as dog fighting and hunting, so breeders purposely tried to create aggressive breeds.

Puppyhood Puppies that were taken from their mothers very early in life are sometimes more aggressive than those that were nurtured by their mothers. Puppies that are not socialized at a young age tend to be more dog-aggressive because they do not know how to behave around other dogs and may feel threatened or anxious around animals. Dogs that are still intact are also more likely to exert dominance and aggression. Consider spaying or neutering your dog.

Training Dogs that are not trained and/or lack structure and clear direction from their owner tend to be more aggressive. Take the time to properly train your dog.

Illnesses and Experiences Aggressive behavior can simply be a side effect of an illness or condition or the after effect of a traumatic experience. It is common for dogs who were abused by a previous owner to display aggressive behavior. If your dog is anxious or afraid for any reason, he/she is likely to show aggression.

Understanding why your dog may act aggressively helps you better care for him/her. Learn how to care for a dangerous dog here.